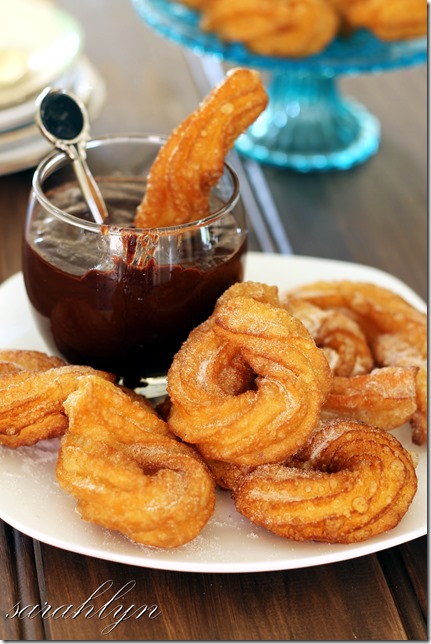 rice bran oil or any cooking oil, to deep-fry

1. Combine sifted flour and salt in a large bowl.  Place the water and butter in a medium saucepan over low heat and cook stirring, until butter melts. Bring to the boil. Add the flour and cook, stirring with a wooden spoon, until the mixture forms a ball and comes away from the side of the pan. Transfer  mixture into a clean mixing bowl fitted with a paddle attachment. Set aside for a few minutes to cool slightly.

2. Using an electric mixer , beat the eggs into the flour mixture, one at a time, beating well after each addition until well combined (mixture should look glossy and thick). Transfer mixture into a piping bag fitted with a 1.5cm star fluted nozzle.

3. Half-fill medium heavy-based saucepan with oil. Heat oil over medium-high heat (you will know when the oil is ready when you drop in a cube of bread and it turns golden brown in a few seconds).

4. Pipe mixture into the oil and use scissors to cut the dough to a desired length. Cook for 2 minutes and turn using tongs and cook until golden brown. Use a slotted spoon to transfer to a plate lined with paper towel. Repeat with the remaining dough.

5. Combine sugar and cinnamon in a bowl. Sprinkle churros with cinnamon sugar.

6. To make the chocolate sauce, bring cream almost to the boil in a small saucepan. Add chocolate and stir until smooth. Cool slightly. Serve churros with chocolate sauce.